Beaches and surfing - not to mention a wonderful mild climate - are the reasons why Biarritz appeals as a holiday destination. Its ideal location in the Bay of Biscay, on the French Atlantic coast, makes Biarritz the surf capital of Europe. But even for those who want to spend less time in the sea, its beaches offer an ideal place to relax, swim or simply to enjoy the sun's rays. The six beaches of Biarritz offer a lot of variety. Some are perfect for swimming or surfing, others are ideal for families with young children. Here is our guide to help you choose the right beach for you and your family. And don't forget to check the tides beforeheading to the beach! 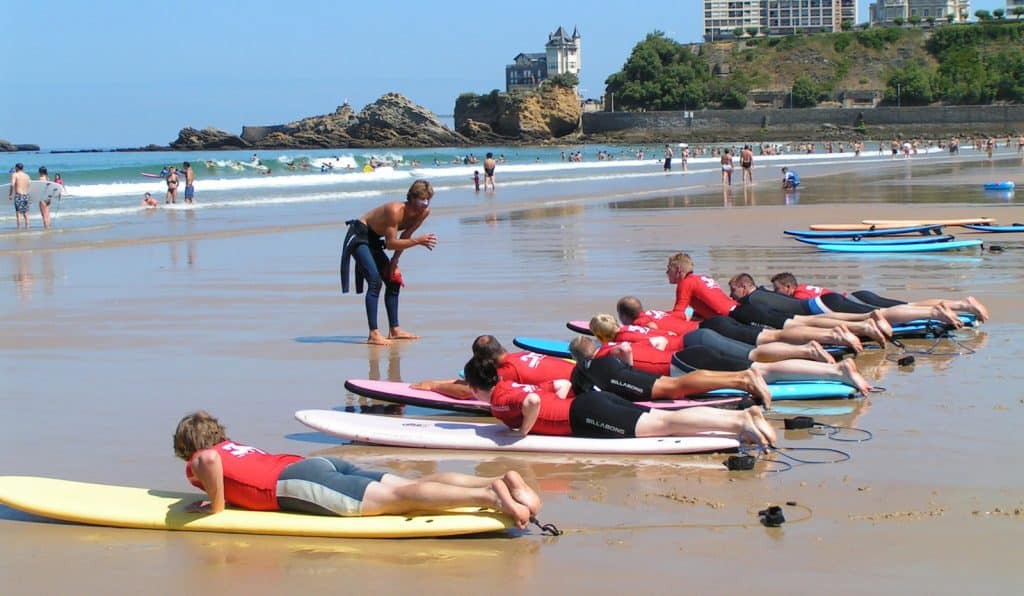 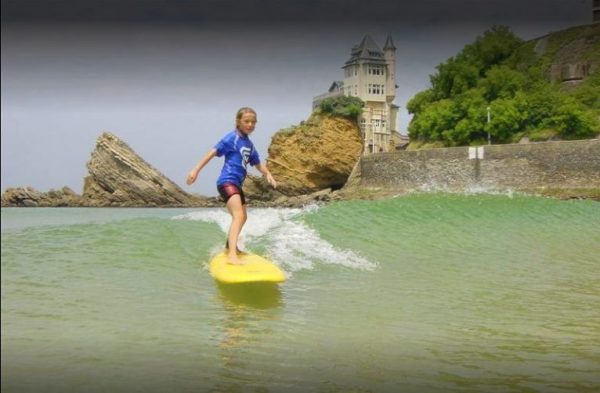 There are dozens of surf schools in Biarritz and especially on the Basque coast. Over the years and experiences we got to know them, therefor we have selected for you the one that meets our quality charter: pedagogy, infrastructure, friendliness... for Biarritz, La côte des Basques we have chosen a historical surf school (the first one in France) and which is located on the most beautiful beach in France, according to the ranking of Travelers' Choice from Tripadvisor! Whether you are alone, with a partner, a family or a group, Ocean Adventure will perfectly meet your expectations.

On a board since the age of 3, it is alongside his father and brother, both surfers themselves, that surfing has become a passion for Xavier. His career as a competitor and Professional Free Surfer has allowed him to go around the world and surf the most beautiful waves on the globe.

With a State Surfing Certificate and a strong experience as a top-level sportsman, Xavier will take you to the best spots on the Basque coast south of the Landes for an unforgettable session and will share with you his passion for surfing and the ocean.

This beach has remained popular with local surfers from the outset. Visit this beach and you'll understand why: on a cliff skyline, you will have a beautiful view of the Pyrenees and the Spanish coast while the wild breakers of the Atlantic continue to roll. Even if you're not keen to surf, there is still a large expanse of sand to enjoy, not to mention the view! There is a parking lot nearby and a free shuttle bus from the Old Port. Perhaps the only flaw of this wonderful beach is that swimming must be suspended because of high tide: the water comes really high and the sandy beach disappear! So be careful if you go there when the tide comes up. There are rescuers from early June to late September. If you want the authentic experience of Biarritz's surf beach, then this is probably the beach for you. 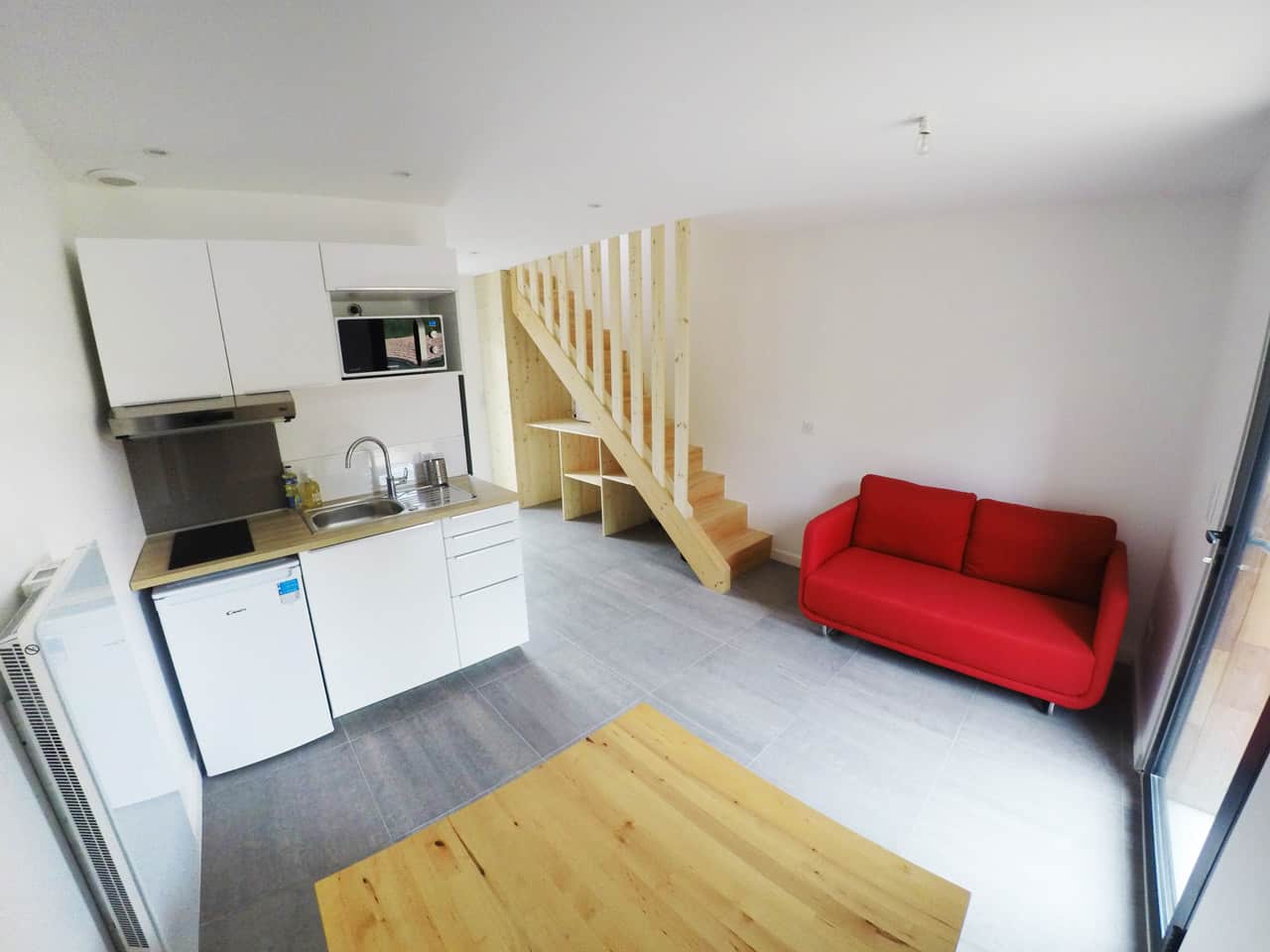 We offer traditional or original activities such as "surf therapy" as well as accommodation adapted to your needs: economic for summer camps and youth groups or by the sea for companies.

We are specialists in stays and surf camps for groups of teenagers (boys and girls), and summer camps! Our basic program is designed especially for teenagers and we invite you to come with us to surf on the beautiful beaches of Biarritz, on the Basque coast

Teenagers are in full growth and are learning about life from day to day. Through the practice of surfing we try to provide them an experience that will gradually lead them to surpass themselves... Through the dynamics of the ocean and waves, we teach them to control their fear and know their limits, while respecting their evolution, their abilities and everyone's motivation. We guide them to gain self-confidence and teach them different techniques to help them progress.

A group surf holiday is always more fun and cheaper! As our philosophy is "Better together", we want to share with you special offers and prices if you come with your favorite group of people. Colleagues, fellows from work or university or childhood friends: take a few waves together in the morning and go back to the surf camp where you can share a few beers, smoothies and dance under the moonlight.

For Work Councils and Companies: Team building activities are ideal...

Accommodation by the seaside 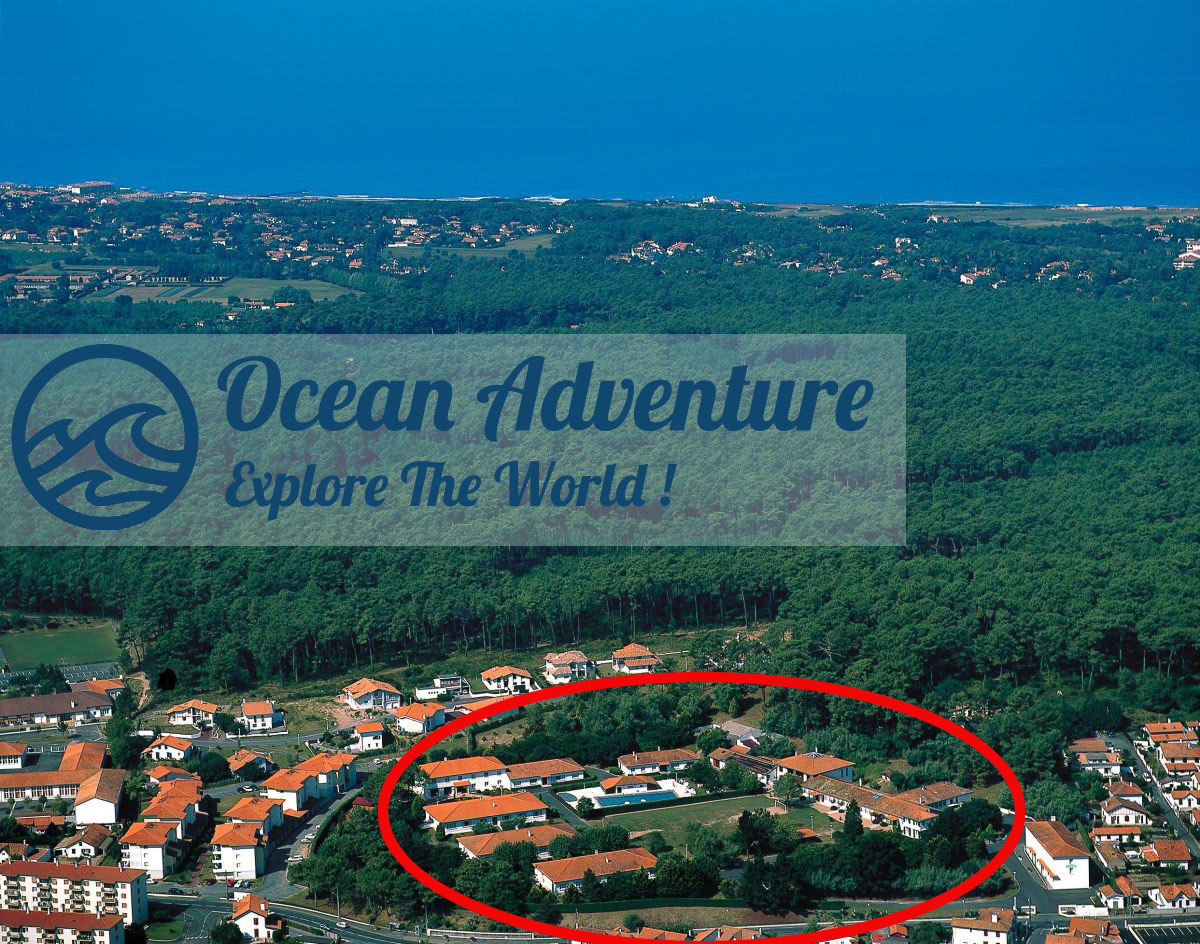 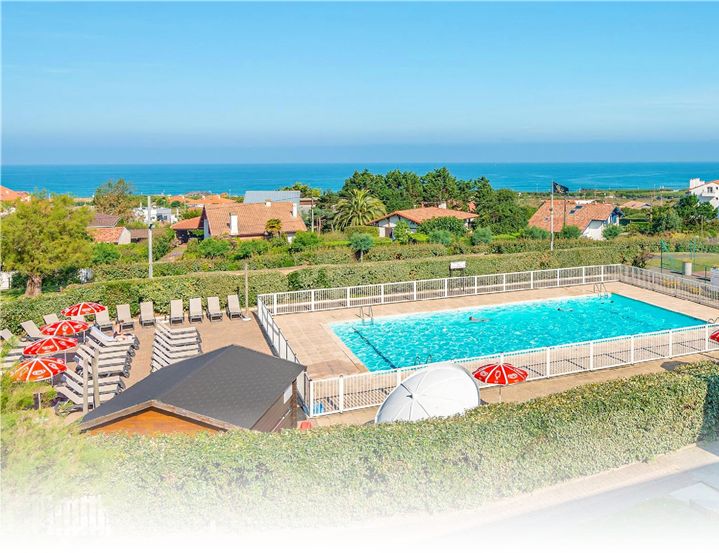 From the integration seminar to the team building seminar and the management seminar, company seminars differ from other company events because they are an essential management tool which help your company to progress... Surfing lessons with Gautier Garanx followed by a TedX-type conference on the achievement of ambitious, risky, "challenging but achievable" goals that require taking risks that you think you have mastered... but which get out of hand. You can listen to Gautier Garanx, a big waves surfer and also a customer manager of a big supermarket chain, who out of passion, physical and mental preparation, won the most prestigious big wave competition in the world: the XXL Billabong... a record that pushed him to his limits, to the edge of a blackout. Crazy story! In order to combine theory and practice, but also to give your employees the tools to achieve ambitious challenges, we offer a holistic approach that boosts the body and mind:
Surf Therapy Seminar 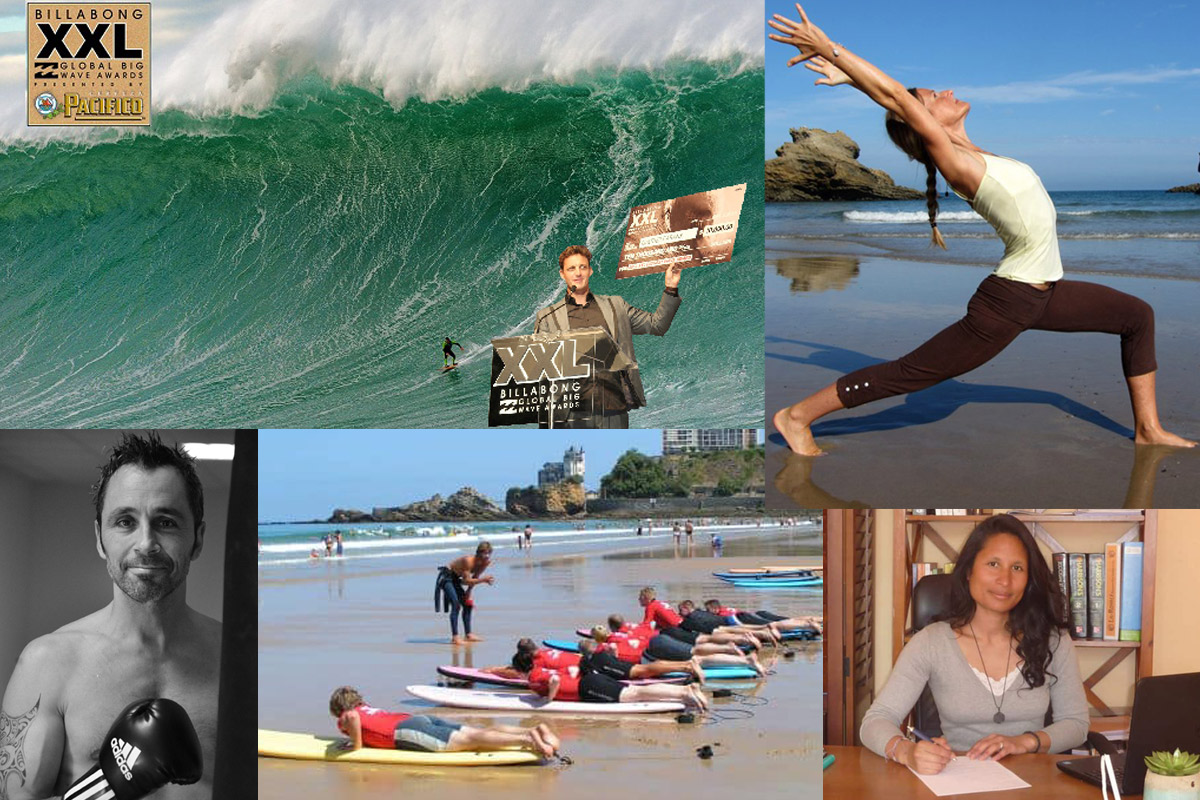 Beaches and surfing – not to mention a wonderful mild climate – are the reasons why Biarritz appeals as a holiday destination. Its ideal location in the Bay of Biscay, on the French Atlantic coast, makes Biarritz the surf capital of Europe. But even for those who want to spend less time by the sea, beaches offer an ideal place to relax, swim or simply soak up the sun’s rays. The six beaches of Biarritz offer a lot of variety. Some are perfect for swimming or surfing, others are ideal for families with young children. Here is our guide to help you choose the right beach for you and your family. And don’t forget to check the tides before heading to the beach!

The beach close to the city center is the Grande Plage. It means the “main beach” or “great beach”. If you’ve seen pictures of Biarritz, it’s most likely this beach which is showed. It’s also where notorious people and less notorious come to have a swim and lay down in the middle of this seaside station. Thanks to massive waves coming from the Atlantic Ocean, this beach is also considered as one of the nicest surf beaches of Europe. Here, the waves can be huge! The Grande plage goes from the well-known Casino to the Hôtel du Palais (Palace’s hotel) even more famous. This beach offers all what you need for a perfect day on the sand: clubs for children, coffee shops, restaurants, and 3 underground car parks. Keep in mind that this beach is even more crowded during high tide! Sometimes, the swimming areas and surf areas are moved depending on the tide and beach attendance. This beach wasn’t always known by this name: it used to be called the Plage des Fous (Madmen Beach) because of the recklessness of the first swimmers faced to the massive waves. Then in the middle of 19th century, the beach was called the Empress’ Beach to honour the Empress Eugénie (Napoléon the 3rd’s wife). The Palace’s Hotel has also been built for her.

Miramar Beach is really a continuation of the Grande Plage after the Hôtel du Palais – perhaps less popular because it is a little further away! Surfing is not allowed here although bodyboarding is.
There are more rocks here and when the sea is a little rough or during high tide, the currents can be dangerous, causing unwary people to be drag by the sea. Rescuers are on duty from late June to late August. That said, it is a charming beach for a quiet swim and sunbathing, it’s usually less crowded. If you like the atmosphere of the main waterfront but not the crowd, this beach is made for you. Some say that the sand is softer than on the Great Beach. Please note that you are not allowed to swim to the large rock known as Round Rock just off the coast, as it is a bird sanctuary. You can’t go to the Barnacle Beach (further up the coast) either because of the risk of falling rocks.

Old Port Beach is located in the south of the Grande Plage, and as its name suggests, it is right next to the Old Port of Biarritz. This small beach is located in a rocky creek that shelters it from the wind and large waves. This means that it is not great for surfing – but it is very good for people with young children. It’s definitely a family beach.
Port Vieux beach is actually popular all year round with the local population. There are swimming and diving clubs on the beach, as well as cafés and restaurants nearby. Rescuers are present from mid-June to early September.

Marbella Beach is essentially a continuation of the Côte des Basques Beach (where our surfschool is located). It is an attractive beach and has a slightly wilder feel than some of the surrounding beaches. The setting and waves make it good for surfers and beach lounging enthusiasts. Although, due to the difficult access down the stairs and through the rocks, it is not ideal for people with reduced mobility.
Lifeguards are present from June to August and there is a café/restaurant on the beach.

This is a large beach, mainly popular among the local population – perhaps because it is usually less frequented than some of the others and the fact that there is a lot of free car parks nearby. There is also a beautiful walk around the beach and a playground for children, as well as a café. Overall, it is a large beach and one of Biarritz’s beaches that are often neglected by tourists. One thing to note: when the tide is high, waves are much more stronger!